The Society wishes to thank the following members who have contributed selections from their collections for this display. 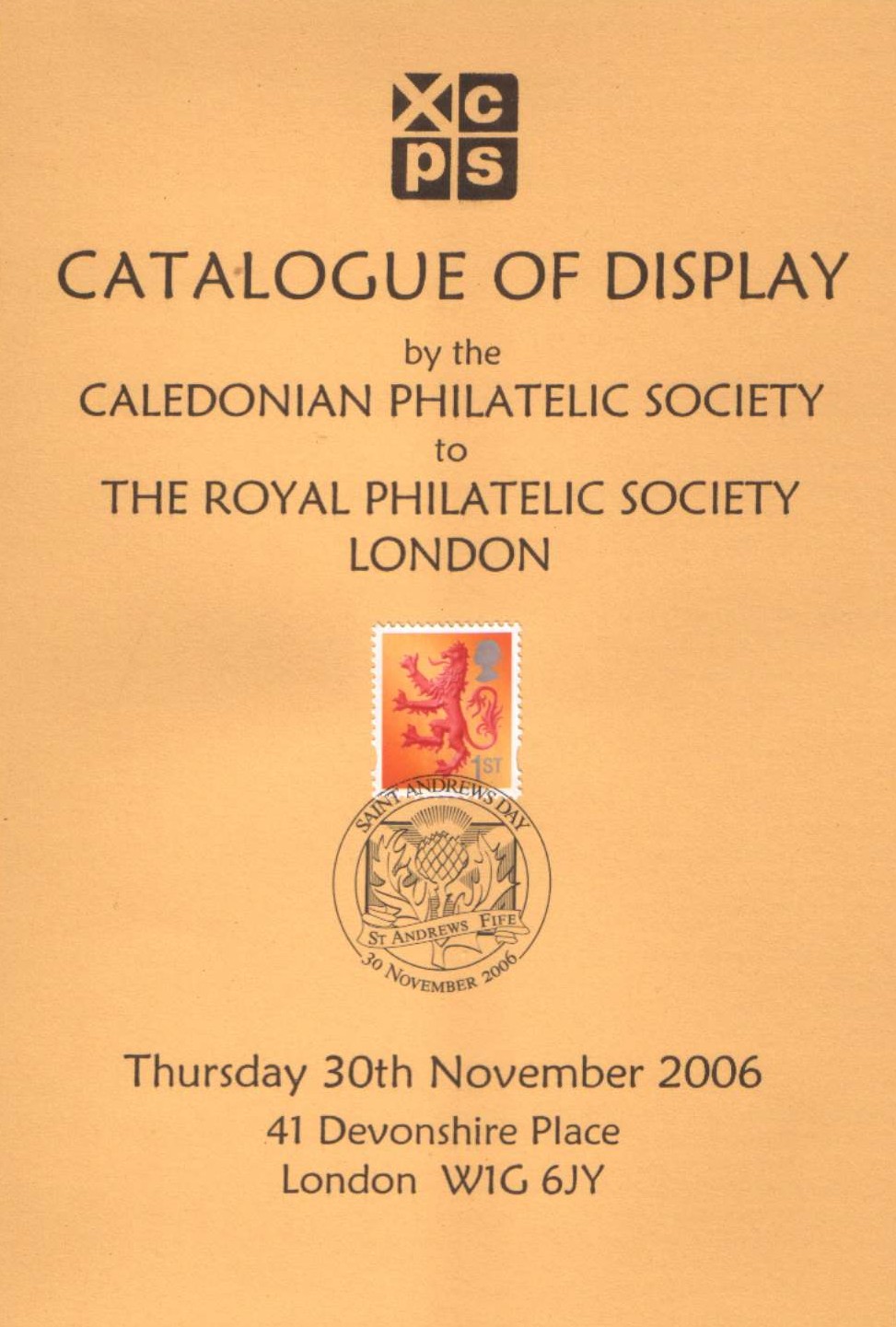 A selection of some of the varied material contained in the Society’s Forgery Collection.

Glaswegians on stamps, covers, booklets and other philatelic material. A display specially commissioned for the Centenary of the Caledonian Philatelic Society in 2006.

The following sheets seek to give a brief history of the River Clyde and through the medium of stamps illustrate the variety of ships built in the many shipyards along its banks.

A selection of handstamps from this popular Clyde island - covering the period 1853 to 1966.

Fr. 12 The life and times of Para Handy

Postcards were at their highest popularity when in 1906 Neil Munro published his short stories relating the escapades of Para Handy and the crew of the Vital Spark as they sailed ^around the Clyde and the West of Scotland. Here postcards are used, not too seriously, to illustrate the topical events that Munro often featured in his tales.

A Registered Port with its own fishing fleet, it was the second Post Office in the County of Argyll and was opened by 1755. (The first was at Inveraray by 1715.) A Royal Charter dated 19th April 1700 was granted by King William III, raising the old Burgh and Barony to the “Dignities and Privileges of a Royal Burgh”.

This exhibit shows examples of the barred 1844 type, the duplex and circular postmarks. Some struck in blue, postal rates, instructional postmarks, unusual frankings and the rare Hamilton single arc duplex are shown.

A collection of postmarks starting from the early undated ones of 1851 (red for day, black for night) to more modem ones used as late as 1982.

The post office opened in 1725 with the town becoming a Burgh of Barony in 1748. This short display shows the development of its handstamps from the Straight Line namestamps to the numbered Double Circles.

On 8th May 1933 Highland Airways inaugurated a passenger service between Inverness and Kirkwall. In 1934 the PMG placed a contract for the conveyance of all first class mail by Highland Airways. This service commenced on 29th May 1934.

A collection of postal history items which have crossed all or part of the Sahara Desert by air.

For decades battleships had been the prime ships of the Royal Navy. These sheets recall famous names - ‘Warspite’, ‘Hood’, ‘Rodney’ and ‘Vanguard’ with covers, cards and cachets.

The exhibit shows examples of mail relating to the internment camps in Uganda with particular emphasis on the Maltese removed from Malta under the emergency Powers Act.

Malawi was granted independence on 6th July 1964 and celebrated the event with an Independence Trade fair from 4-6 July. An unusual air letter was produced canceling a Nyasaland stamp with a Malawi canceltwo days before Independence and Lilongwe P. S. landed in hot water by using the sacrosanct cockerel emblem for an FDC. Numerous varieties were produced before Malawi was given Republic status in 1966.

The war against Russia, more commonly known today as The Crimean War, started in October 1853 when the Turks declared war on the Russians who had occupied Moldavia and Wallachia - still part of the Ottoman Empire at the time. The Turks had an alliance with France and France with Britain and they joined in during March 1854, the war lasted until 1856.

Extracts from a collection of letters to and from notable figures in the world of Philately: illustrating the history of our hobby.

This exhibit shows the Sir R. Storrs’ copy of the Survey of Egypt book, his cover to Sir Mark Sykes (of the Sykes/Picot treaty). A proof with (Lawrence’s?) notes and how Sherif Hussain’s ‘unadopted’ design eventually was adopted.

A study of the stamps and postal history showing the various printings of the 1914 and 1915 War Charity issues produced for the benefit of the widows’ and orphans’ fund organised by the Imperial Women’s Patriotic Fund.

The British settlements along the east coast of the Straits of Malacca were acquired around the beginning of the nineteenth century and amalgamated into the Strait Settlements in 1826. The display traces the early markings and the use of India stamps in Penang and Singapore up to the time of transfer to the Colonial Office in 1867.

This short display of the King Edward VII 1 ½d postage stamp attempts to convey the fascination and frustration inherent in the complexities in this issue.

The islands of St Pierre and Miquelon, now part of France, have enjoyed an interesting history in terms of sovereignty and of trade. This interesting history also applies to the early stamp issuing policy of the islands. The exhibit provides some examples of this for the period up to 1909.

The sheets show some of the stages in the design and preparation, by De La Rue, of the Postal Stationery for Bahamas during the reign of Queen Victoria, from the original Artist’s drawings to the issued envelopes and cards.

With the occupation of the Channel Islands by German forces various ‘local’ stamps were produced to meet postal requirements as British stamps were no longer available. Following on from the earlier “Arms’ issue, the famous Jersey artist Edward Blampied was commissioned by the authorities to design a set of six stamps, depicting local scenes. This display of these ‘Pictorials’ includes proofs, gutter pairs, varieties and a selection of covers and cards.

The Netherlands was a non-belligerent nation in both these conflicts of the first two decades of the 20th century. However both incoming and outgoing mails suffered censorship by various authorities. This brief display shows examples of some of the marks and labels used in a variety of situations.

The First automatic machine stamp booklets of Swedish design were introduced in The Hague on September 4th, 1964. The machine accepted 1 guilder coins and dispensed stamps most of which prepay the basic inland rate. The rates were increasing at this time.

Zanzibar a British Protectorate since 1890, gained its Independence on 19th December 1963. On the 12th January 1964 life on Zanzibar was altered by a revolution which eventually led to the loss of its Independence. The display tries to show this using the stamps of Zanzibar.

Rotary International celebrated its 100th anniversary in 2005, an event commemorated philatelicly by many nations. This display charts the expansion of the Rotary movement from its modest beginnings in Chicago to the world wide organisation it is today.

A topic of conversation amongst the members of the newly formed Caledonian Philatelic Society must surely have been the theories published by Albert Einstein the previous year (1905). This short display looks at aspects of his life and work.

A selection of philatelic items illustrating the Royal and Ancient game.

A selection of postcards illustrating the conventions used and problems encountered by the members of the many postcard exchange societies which were established in the early 20th century.

The Philatelic Congress of Great Britain has been hosted by Philatelic Societies throughout Britain in many different venues. This display shows special postmarks and labels from the earlier events.